The White Sox don’t fill The Cell all that often, so here’s what it looks like when it’s full. 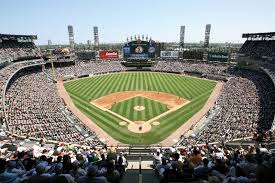 But did you know that, if you could bus every adult currently in prison in Illinois to this park, there would still be enough people outside to fill the Chicago Theater twice?

“We have about 20 adult facilities which range from  maximum security to mental health specific facilities to minimum security that house approximately 49,000 adults in Illinois.” explains Jenny Vollen-Katz, Director of Juvenile Justice for the John Howard Association.

And to stick with the baseball park for one more moment, you could almost fill it with the number of people who are released from Illinois prisons every year. And yet again with the people who are incarcerated each year, many of whom are the same people just coming back to prison.

“We don’t just send people away, and they go and we’re done with them,” explains WBEZ’s criminal and legal affairs reporter Rob Wildeboer. “No, 33,00 are coming back into the neighborhoods this year, with 72,000 people coming in and out of the prison system each year according to the Department of Corrections.”

And let’s not forget Cook County Jail, which is supposed to be largely a detention facility to hold people who can’t make bail until their trial. The population hovers around 10,000 people, although the population moves in and out quickly.

So who are these people?  “The vast majority are non-violent offenders,” Vollen-Katz explains. “And a huge number of them are mentally ill. Tom Dart has been quoted saying 28% of his population at Cook County Jail are mentally ill. National studies indicate numbers far higher in most correctional institutions. 73% of all women, 55% of all men are mentally ill within the national corrections system.”

But how to define “non-violent offender”?

Toni Preckwinkle, appearing on My Chicago with Odette Yousef, said this about Cook County Jail: “Most of the people in jail are there because they can’t pay their bond. And of the 90% who are awaiting trial, 70% are awaiting trial for non-violent crimes.”

But States’ Attorney Anita Alvarez, meeting with the press after a recent City Club speech, seemed to contradict Preckwinkle when she said that most people at Cook County Jail are repeat offenders, and that 82% of the population has two or more violent offenses in their past. So while their current charge may be something like drug possession, judges do take into account the offender’s legal history.

“What follows you is a rap sheet,” Vollen-Katz explains. “Saying how many times you’ve been in court and what you’ve been charged with and what the end result was, legally, of those charges. What doesn’t seem to follow anybody is something like a social history – the reasons someone is there, or the reasons they failed to be successful on probation…we don’t have a very full picture on individuals there, about why they’re there… there’s a lot of system failures before our criminal justice system that lead them there.”

“We need to get to a point,” asserts Wildeboer, “Where society can say yes, that’s a bad crime, but we still don’t think prison is the appropriate punishment for that…will we get to a place where the public will accept – yes we need to let some people go even though there’s some risk inherent there…dealing with mass incarceration is gong to take more than, oh, let’s just let out the non-violent offenders.”

So much of this conversation results, however from garden-variety politics. It’s vastly easier to increase fines and punishments for various offenses in the name of protecting the public. Nothing frightens a politician more than a flyer at election time screaming about how the incumbent has been soft on crime.  So, among other effects, there’s a race to create more mandatory minimum sentences, because politicians claim that judges don’t hand out strict enough sentences.

“The result is that we’re filling up our prisons faster, keeping them fuller longer, and we aren’t creating any more public safety,” says Vollen-Katz.

Lawmakers have also created “registries” for sex offenders, but as Wildeboer reported recently, the Chicago Police are turning away people on the registries who’ve served their time and are trying to comply with the law by re-registering. But citing insufficient manpower, the CPD closes the line hours before the hours posted on the door.

But, in the big picture, what is the function of a prison? Is it to punish? To rehabilitate? To educate or train? Or just to segregate people from society?

However, “if punishment is an important role for prison,  I think we’re doing a fine job”, concludes Vollen-Katz.