Have you ever had an encounter with one of these? 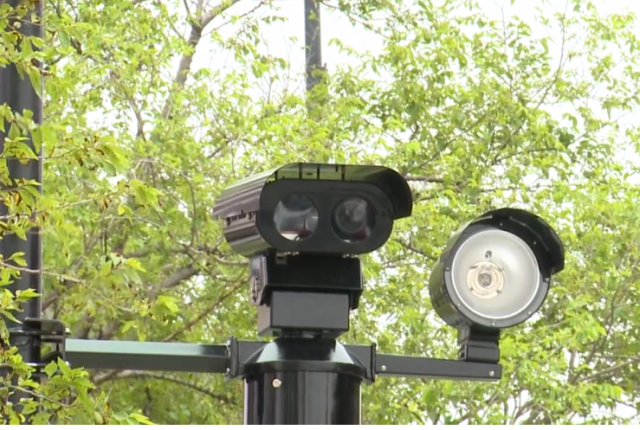 Well, perhaps you thought it was making sure you didn’t blow a red light. But depending on the date, it might also have been ratting you out for creeping through the intersection without stopping during a right-turn-on-red.

In fact, according to the Tribune’s David Kidwell and Alex Richards, there was this one little rogue camera at Lincoln and Kimball/McCormick. Here’s the way Kidwell describes its odyssey: “For months, if not years,” he explains, “It was only ticketing people going straight. People trying to beat a red, whatever. And it was issuing one, two tickets a day. For six months, only a hundred tickets. Then, for twelve days in the beginning of 2012, 563 tickets – 560 of them for right-turn-on-red.

Alex Richards, after the Trib’s arduous legal battle with the City, was presented with the prize: a database of every ticket issued from 2007 to March of this year. He and his team went about assembling an activity graph for every camera. They looked vaguely like EKGs.

“And that heartbeat, if it were yours or mine, we’d be in the intensive care unit,” Kidwell states. That’s because there’d be months of fairly routine activity punctuated with wild spikes at random times. Usually only for a few days, then the camera would return to normal. Self healing cameras, or some tampering by humans eager to get the ticket numbers up? Nobody knows for sure, because the company running the cameras never checked.

“Before you install a red-light camera you’re supposed to define a problem, Kidwell asserts. “You just don’t sprinkle cameras everywhere and wait for the money to roll in. And if they have a problem that people are having accidents because of right turn on red, then you put a camera there to address that problem.”

And presumably, you’d let the public know if the function of the camera had been changed.

So if the City of Chicago had defined a problem – namely people causing crashes by rolling through red lights, where would these cameras be, and how many?  Did the City need to install 350 such cameras to address this perceived problem?

“The City’s Inspector General, the City’s top watchdog, in 2013 at the insistence of several aldermen, asked the city exactly that question, and he could not come up with an answer,” Kidwell tells us. “And his audit was very critical of the city for a complete lack of records on how they choose where they put these cameras.”

But they did raise a lot of money. Almost a half-billion dollars in the seven or so years they’ve been in operation, Richards and Kidwell tell us.

“We found these spikes where cameras that normally issued 2, 3, sometimes one ticket a day for periods of years, suddenly were tagging drivers at rates of up to 56 a day. And then as suddenly as they went up, they’re right back down to normal again,” Kidwell explains. And, remarkably, after the graphs began taking shape in Kidwell’s software, he and his colleagues realized something. “I think we were the first to actually see this in action,” he says.

Kidwell relates the most incredible story of John Bills, who a almost set a a new standard for bribery, if the charges stand up at trial.

“John Bills was the person at the City, a mid-level bureaucrat who was assigned the task of taking over this thing, putting it together, and bringing a company to town,” explains Kidwell. “And we began investigating tips that he was involved in a very cozy relationship…as early as 2012. We started writing stories about that and now, as it appears, the company has acknowledged that they paid him up to two million dollars in bribes. Lavish vacation trips, condominiums, cars, cash payments through a consultant that he helped hire…what’s interesting about this case is that there has been no correlation drawn to the oversight of this company, yet, and these ticket spikes. But he was the person watching the store during a lot of these spikes…He was the City’s point-man on that contract, he was the one who had all the contact with this company at this time.

It’s important to point out that Bills didn’t overlap much with Rahm Emanuel. He worked almost exclusively for Rich Daley. But there’s an interesting second chapter.

Rahm Emanuel decided he wanted speed cameras. And the logical company to install them was Redflix, the company that already put up the red-light cams.

“When the speed camera contract was still being decided,” says Kidwell, “Redflix had quietly hired a former Rahm Emanuel campaign manager on one of his congressional campaigns, a guy named Greg Goldner, as a national consultant to help promote these cameras. And when John Bills retired from the city, he went to work, on Redflix’s payroll, for Greg Goldner, on that consulting deal.

As we know, after the revelations in the Tribune’s stories, Mayor Emanuel vowed to fire Redflix, but it wasn’t until this past March that the company actually turned over operations to their successor.

One of the ways in which the ticket numbers spiked so dramatically during those short bursts might have had something to do with the duration of yellow lights.

“According to the photographic evidence in the red-light camera photos, yes, in some instances they did appear to be shorter (or longer – there was a variance that shouldn’t have been there.) Every photo has the yellow-light time added there,” Richards tells us.

But in that infamous episode at Lincoln and Mccormick? Of the 560 questionable tickets, about half showed a four-second amber light, and about half had only three seconds.

And if you’re fascinated by Rahm Emanuel’s personal style, it’s worth the time it takes to read this transcript of Kidwell’s interview with the Mayor as he was trying to get documents that explained how decisions were made about the locations of the cameras. Especially the part where the Mayor reaches over and turns off Kidwell’s tape recorder.