Mick  Dumke and Ben Joravsky of the Reader are joined by special guest Cliff Kelley, the Governor of Talk Radio (and afternoon host on WVON) for our final wrap-up discussion before election day.  We also talk ward politics, this week in 16, 21 and 29.

Some general themes: Bob Fioretti threw away his accomplishments as a thoughtful opposition leader for $80k. There’s no evidence that aldermen who battle with the mayor get worse services in their wards as punishment. And former Alderman Cliff Kelley believes the Council could be cut immediately to 25 wards and that it would make aldermen more independent, not less.

Quick snapshots on the election: Garcia would beat Emanuel easily if he’d had money early on and a slightly longer head-start. Not enough attention has been paid to issues like police stop-and-frisk in African-American neighborhoods. And the polls, especially the Trib poll, are under-counting Latinos. One panelist says Rahm wins, two say it’s a Chuy upset.

Then, from Ben Joravsky, the most radical reform idea of all: Since the garbage grid system seems to have been one of Mayor Emanuel’s big successes, making services more efficient and less costly, let’s just adopt the grid as our new ward boundaries. Look at that map – it’s compact and contiguous! 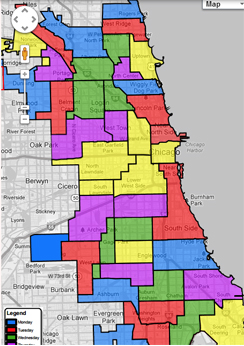 Three of Chicago’s most passionate political animals, all at one table.