There are currently about 115 families residing in the Chicago area who are direct refuges from the war in Syria. In all of Illinois, there are maybe 130 families. What does that mean, in  terms of the big picture?

“Well, says Suzanne Sahloul, founder of the Syrian Community Network, “If you want to put things into perspective, we have close to 5-million people registered with the United Nations High Commission for Refugees with the UNHCR, 5-million people. We have about 2 to 3-million internally displaced people. We have another 2-million people who are unregistered refugees living in the surrounding countries of Lebanon, Turkey, in Egypt, and so everybody wants to travel or live somewhere else.”

Makes our 130 families – maybe 500 people – look pretty insignificant, doesn’t it?  “So what we’re seeing,” Sahloul continues, “is the worst humanitarian crisis since World War II, and this is the highest number of refugees that we’ve had in the world since the 1940s.”

In fact, adds the University of Chicago’s Jessica Darrow, the count of all the world’s current refugees dwarfs the Syrian numbers. “There’s more than 65-million who are either internally or displaced over a border. And of those the resettlement program worldwide only resettles less than 1% of those people.”

It can take two years, our panelists tell us, to win a coveted sanctioned seat on a flight for Syrians to Chicago. That’s partly because of the rigid screening our State Department applies to asylum-seekers, but it’s also due, in part, to the tiny numbers of placements our city has  available.

In fact, they tell us, Chicago has a bit of a housing crisis right now because of all the Syrian refugees who arrived since last June. So, many of the newly-arrived are being housed temporarily in hotels until the appropriate agencies can get them settled.

To make matters worse, about half the governors, almost all Republicans, declared almost a year ago that they would not allow Syrian refugees into their states. Governor Rauner was one of them.

“So thank goodness,” says Sahloul, “the courts just two days ago I believe struck down a case in Indiana in which similarly, the threat in Indiana was to shut Syrians out, and the courts found you in fact cannot discriminate against a category of people. All refugees, okay, you can shut your doors to all refugees, and we can make the case for all the reasons you wouldn’t want to do that. The refugees bring a thriving community, and especially in cities where sort of the inner city core has been hollowed out by a move to the suburbs. You bring folks who have an unbelievable skillset, entrepreneurial skills that revitalize a city, and you bring folks who are community-driven and who are eager to contribute to the communities that they arrive in.”

“What we do see in Illinois,” Sahloul continues, “is that the constituents of our Governor, the folks that are living here are opening their arms, in many cases their homes, and in lots of cases their wallets to support the folks who are arriving. The refugee resettlement agencies and the mutual assistance agencies that are here, so the agencies that are tasked with serving refugees when they first arrive are literally overwhelmed.”

We’ve all seen the horrifying images of Aleppo, the Syrian city that’s been all but destroyed by the country’s own president and his allies. Sahloul puts that into perspective for us, pointing out that Aleppo is about the size of metro Chicago, and similar in many ways.

“Damascus is the oldest inhabited City in the world,” she explains, “But Aleppo is just as old as Damascus, and actually it’s on the silk route that Marco Polo used to take. It’s a popular trading spot in the olden days when traders from all over used to come and they would stop in Aleppo. It’s cuisine, it’s culture, it’s fabric, it’s art. It’s a unique City even from the rest of Syria…the regime wants to suffocate Aleppo because it’s close to Turkey, and now they consider Turkey as an enemy, and so they need to suffocate the City, and if they can control Aleppo then they know that the whole uprising will be over. So what’s happening now is that they are dropping barrel bombs. Barrel bombs are very dumb bombs, cheap bombs that are barrels stuffed with shrapnel and TNT that are dropped from helicopters on hospitals and schools.

Which brings us to Bana, the Anne Frank of Aleppo..

“Bana, she is 7 years old and she has been using her mother’s Twitter (@alabedbana) to take pictures and to live tweet what’s happening in Aleppo,” Sahloul explains. “So she would write, ‘I’m hearing bombs now. I’m hearing this. I hope we survive. I hope the barrel bomb doesn’t drop on our apartment building.’ She takes pictures ‘this is where my friend used to live. This is where so and so used to play. This is where we used to go to school. I don’t have school.’ She has been out of school for a year now. Her mother was an English teacher, so she’s been teaching her English at home and she’s been using that English to tweet. And so this is how a lot of people now started saying ‘well this is exactly like what happened to Anne Frank,’ and we know the tragic ending of Anne Frank’s family. I just don’t comprehend in the 21st Century when we’re seeing all that we’re seeing, these live images. Getting them immediately. It’s not like we have to wait until history class to read about them.” 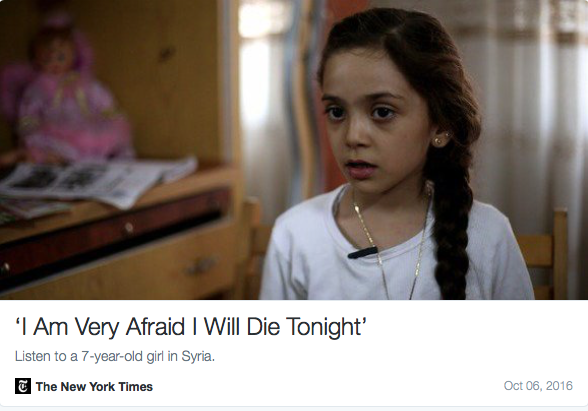 We ask how a sophisticated, educated city can turn on itself – driving one part of the population against another and destroying everything in the city in the process.

Darrow, says she’s thought about that a lot, especially since her research in Rwanda. “What are the conditions and what is the context,” she’s asked herself, “in which there’s so much fear and so much hatred and so much “other-ing”. Here we are in Chicago at a time where, in the United States of America where the politics are about creating another and about identifying differences as opposed to similarities…Islamophobia is a very very serious and real and flourishing phenomenon of hate in our country. And so I would say oh gosh, we’re not that different. The context might be different, and conditions. That’s the difference I think. But seeing the rise of hate and racism and Islamophobia in our country, or the stoking of something that might already have been there reminds me that there’s nothing different about the United States, except for timing and condition.”

You can read a full transcript of this show HERE: cn-transcript-oct-6-2016