The youTube video is above, and the SoundCloud audio-only link is below.

In the first half of this two-part show, NBC5’s Mary Ann Ahern joins us to talk Pritzker, Blago, Rauner, Emanuel, journalism and Medicaid.

And later, we’re joined by Phillip Montoro of the Reader and David Roeder with the  Chicago News Guild to talk about the situation with the Sun Times and Reader.

The spring primary to decide the Democratic candidate for Governor of Illinois seems already to have concluded. At least that’s what the party leaders would have us believe. The formal endorsement of Pritzker this week by the leadership of the AFL-CIO seemed to fortify the idea that the billionaire was unstoppable. But just a few days ago he seemed vulnerable.

He had weathered a story in the Sun-Times about how he had managed to dramatically lower his property taxes, and then the Tribune hit hard with recordings of the candidate on the phone with Rod Blagojevich.

“And as I hear it,” Ahern begins, “Everyone is wondering where did they get the tapes, and who knows if this is absolutely correct, but that the Tribune was sort of aha, why didn’t we know about that property tax? So they start digging and their reporter who had written one of the books on Blago – ‘Aha, you know I think I recall.’ And so they find these tapes and yes, the tapes are damaging because everyone in the world at this point, this conversation one of them was literally a week before the former Governor is arrested, if you didn’t know that he was under investigation you had to be under a rock at that point. I mean we all knew for about two years.”

On the tapes, Blagojevitch and Pritzker discuss the governor’s possible appointment of Pritzker to Obama’s Senate seat or to the State Treasurer job. “And then asking a couple of times about this… that’s what folks do, they definitely ask, but there was this implied how much money are you going to give me for it kind of deal.”

“So, now, a week later, five days later, the AFL-CIO – whoa, we’re going to endorse Pritzker,” she continues. “Well, it changes the subject certainly. It’s way too early, way too early. What, we’re ten months or nine months away from a primary race. The old adage of Labor Day. Boy that’s blown out of the water.”

But, as Ahern points out, “Let’s also remember that the AFL-CIO endorsed Dan Hines in the U.S. Senate race against Barack Obama.” That Senator Hines thing never came to pass.

There are all kinds of theories about why party leaders have been so anxious to lock in their billionaire friend, and Ahern has one of her own. “The Union might not have to give much money to the Governor’s race, but instead focus on some races further down,” she explains. “Some heated House and Senate races, that they have lost a couple of them to Rauner, so if Pritzker doesn’t really need their money that much, maybe he needs the feet on election day, that kind of thing, that this allows them to spend their money on those races further down the ladder.

But that doesn’t solve the enthusiasm problem. “And, you know, we certainly have seen the Bernie Sanders folks of the party, the progressive Democrats, are they going to embrace J. B. Pritzker when Pritzker was such a Hillary supporter as well?”

Many Chicago Democrats assume that Bruce Rauner is vulnerable, but Ahern says he’s still very popular downstate in some the collar counties. “This week he was along Hegewisch, the Indiana Illinois border, speaking with some businessmen who would say thanks a lot, everybody is going to Whiting. We’ve got businesses up and down this street that are closing down. You’ve got way too many regulations, too many taxes.  So you know, there are certainly folks who support Rauner and say they like that outsider. They like his message of what he has to say, and for all those folks who think the polls say he doesn’t have a chance, forget it. I don’t think I’ll ever believe another poll again.”

Ahern says a big story that’s still developing is the push by Medicare recipients to have their unpaid bills moved to the front of the Illinois payment line.

“Suzanna Mendoza, the comptroller is saying ‘you know what, I can’t prioritize these payments.’ Medicaid and the providers, the healthcare providers are saying you guys are way behind. Pretty soon here the doctors are going to say no to Medicaid patients because they haven’t been paid in so long. And so they’ve gone to court and asked her to make a ruling and say, ‘Put the Medicaid people at the top of the line.’ And she said, “Well, keep negotiating for two weeks. Let’s see if we can get this. I agree. We have a consent decree and you guys are supposed to get paid. I’m not putting you at the top of the line yet, but work on this. The State and the Medicaid providers, if you can’t come to a solution come see me in two weeks.” If that happens someone else doesn’t get paid. Pensions or schools.”

So the State of Illinois, billions and billions behind in paying its bills, may shortly have to send schools, pensions and human services even further down the list.

“Maybe Judge Lefko could call the Four Tops and the Governor in,” Ahern muses.    “And say, “Guys, we need a deal.” 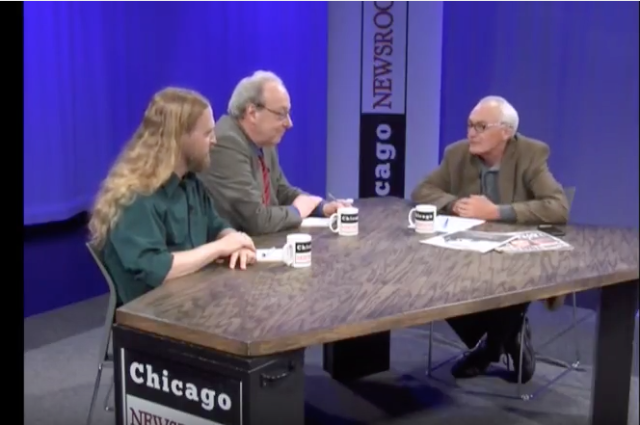 In segment 2, we examine the possible sale of the Sun-Times and the Reader to tronc, the company that owns the Tribune and dozens of other smaller publications.

Wrapports, the company that owns the S-T and Reader, was originally founded by Michael Ferro, who now manages tronc. Are you following this? When Ferro gained controlling interest in the company that owns the Tribune, he renamed that company tronc, and removed himself from Wrapports. So if he gains control of the S-T/Reader, it’ll be the second time. And the entity Wrapports has to satisfy is the Justice Department, which could find that the sale violates anti-trust law.

The question remaining is whether Wrapports searched far enough to find a buyer before offering itself to tronc.

Phiip Montoro, who doubles as the Reader’s Music Editor and union representative, thinks not. “Clearly they didn’t beat the bushes as thoroughly as they could have because we’ve managed to find some bidders in a very short timeframe,” he claims.

“However, we do believe that the Wrapports board would like to keep the Sun-Times and the Reader around,” adds David Roeder, who represents the Chicago News Guild. “I think an element of the board would like to keep the publications independent of the Tribune, but they do want out, and so that’s where we are. They have accepted a so-called non-binding letter of intent from Tronc while asking for other bids in a process that is being overseen by the Justice Department.”

So where are we?

“There’s a bid that has been made by Edwin Eisendrath who is a former Chicago alderman. He ran for Governor about ten or 11 years ago, and he has been working very hard to put together money from other sources,” explains Roeder.

There might be at least one other potential bidder, Neil Bluhm, a major Chicago developer. Others have reported that he missed the deadline for filing and won’t be considered. Roeder says it’s still possible that Justice could hold the door open for him a little longer. “The deadlines are not hard and fast,” Roeder claims.

Both men are at a disadvantage because Wrapports has no requirement to share its propriety information, such as finances, with them. “And we understand that,” says Roeder. “But in some ways I guess we are allies and we would like to see the jobs preserved and the titles preserved.”

So often these difficult bargaining sessions set co-workers against one another. Jake Malooley, the Reader’s Editor, is considered management, so he has sometimes sat across the table from Montoro. “But I bring this up only to say that he has expressed to us support for the no news monopoly campaign,” Montoro explains. That is, he thinks it is a good idea to do whatever we can to stay the Justice Department’s hand and to let other bidders enter this process. I mean we’ve had experience with Michael Ferro when he was at Wrapports. It was not a salutary experience.”

And there are questions about how committed tronc would be to keeping the Reader alive, according to Montoro. “They wouldn’t be required to in order to avoid anti-trust sanctions, because I guess there are other papers in the City that would count as alternative weeklies…We don’t print with the Tribune company. They don’t have the source of revenue from us the way they do with the Sun-Times, and they just turned the Redeye into a weekly.”

“I think if you look at the history of newspaper mergers these just don’t work over the long-term for the weaker newspaper,” Adds Roeder. “The advertising staffs get absorbed and they always have the incentive to sell to the bigger audience, the bigger product.”

“That’s already happened within Wrapports with respect to the Reader and the Sun-Times,” Montoro continues. “There have been consolidations of business functions that have ended up hurting the Reader, that is we don’t have a dedicated circulation manager anymore. We don’t have a sales manager. We don’t have our own publisher, so there’s really nobody specifically looking after the health of the business at the Reader anymore…I think I can fairly state for the Sun-Times staff that is their fear and certainly for the Reader staff as well. We just don’t feel that Tronc has any incentive to keep things going. Once they operate things for a while, maybe a year and a half, two years, and then they can say to the Justice Department, “Ah see, it failed. We gave it our best shot.”

We talk briefly about the possibility that an investor could buy only the Reader and re-invest in it. It would be expensive, Montoro maintains, because the new owner would have to restore the circulation and sales people. But the Reader’s got some assets, such as the Straight Dope column and web site, which is very heavily trafficked. More well trafficked than most people realize, he maintains.

So where does this all lead?

“The bids will be evaluated by the company and by the Justice Department. Probably around the middle of the month they will decide okay, this looks the best,” explains Roeder. The union will have no say in the decision.

If you’re interested in more info, or getting involved in the issue, the guild is maintaining a site at No News Monopoly.

And Phillip Montoro, whose watched the steady disinvestment in the Reader, has the last word. “It’s long been our contention that having learned how to do more with less, that if we actually got any more we could really thrive.”

You can read a full transcript of this show here: CN transcript June 8 2017