5150 N. Northwest Highway was dealt significant blow this week as Mayor Emanuel refused to grant City tax credits that would have helped the affordable housing development get of the ground.

The 100-unit building that would house seniors, veterans and CHA voucher-holders has been a flash-point of controversy on the Northwest side since its announcement earlier this year. And whether or not the building ever replaces a vacant warehouse structure at the junction of Northwest highway and Milwaukee Avenue, it ignited a dramatic debate in Jefferson Park. 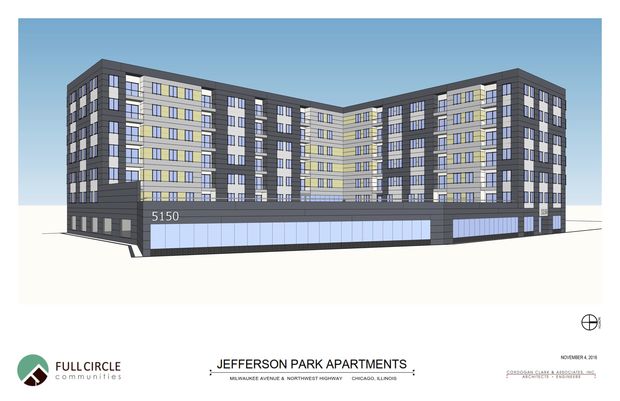 “It’s a chance to activate the gateway to Jefferson Park.,” explains Sara Gronkiewicz-Doran, a representative of Neighbors for Affordable Housing in Jefferson Park, an activist group formed to advocate for the building. “It’s a chance to take space that is otherwise a passthrough and fill it with families and people walking to the transit station at all hours of the day and night, people walking their kids to school, people walking to the school, people driving. You know, it is a way to bring that area otherwise isolated by its history of use and location into the rest of the neighborhood. It’s a great site.”

Many people in the 45th Ward disagree, some strongly. Thousands have signed a petition opposing the structure. There was a loud, contentious meeting in February at a local church that raised objections that were thought by many observers to be racial in nature, along with objections about density.

“I came as somebody who was interested in supporting a project like this,” says organizer Nick Kryczka, “But I and a few other people who were there were vastly outnumbered by those who had come up to show their opposition. And it was that night that that opposition was revealing itself to be really unfriendly in a particular way, like not just to people who were disagreeing with them like I was, but declaring that exclusion should be the policy of the neighborhood. I think the longer arc of the story is that in fact the reality is the reverse, that the vast majority of people who live in Jefferson Park don’t have a problem with the idea of affordable housing in our community.”

The Neighbors for Affordable Housing in Jeff Park group was formed primarily as a reaction to that meeting, they tell us, and they’ve begun passing a petition of their own that’s already garnered about a thousand signatures.

“I would say a large percentage of the people whose doors we knock on haven’t heard about this, Gronkiewicz-Doran continues.  “They haven’t heard about this particular building. They haven’t heard about, they are not aware of , the larger affordable housing crisis, but what they are aware of is – my kid got a divorce and had to move back in with me because he can’t afford an apartment in the neighborhood. My elderly parent can’t get up the stairs to her bungalow anymore and she’s going to have to move out to the suburbs. You know this is an issue that touches a lot of people, and when they are able to make the connection between their own circumstances and the greater need for relief people are much more reasonable about it.”

On this week’s show we talk about the fight for affordable housing in Jefferson Park in context with yesterday’s passage in the City Council of  an affordable housing ordinance. It would mandate the construction of “affordable” units within new larger developments in two white-hot real estate markets on the near northwest and near-west sides.  In these areas, gentrification is a major issue for affordable-housing advocates, because they argue that large numbers of poorer tenants and property-owners are being forced out as development changes the faces of these neighborhoods.

And as developers – and city policy – favor the construction of large buildings with one-bedroom or studio apartments, there’s less and less space for families, and that bothers Gronkiewicz-Doran. “We’re going to get a bunch of affordable one bedrooms and studios, which is great, but there’s no incentive for family development and there’s no carrot or stick to encourage family development,” she explains.

So, although the affordable-housing battles in Jefferson Park and, say, the West Loop are very different, Kryczka says it’s time for the Northwest to get in the game.

“Our view is the fight for affordable housing can’t only happen in areas that are already under rapid gentrification, he asserts. “Because you’re really fighting uphill. So in this way when you were describing that general field of the northwest side’s conservative attitudes, like there is a certain part of that conservatism that actually we identify with, which is what we want to conserve is the mixed income stable and affordable character of the neighborhood. So if you go to a typical block in Jefferson Park or Portage Park nowadays you’re going to find a variety of people, a variety of income levels. You’re going to find one-bedroom, two-bedroom apartments and two-flats and courtyard buildings and then bungalows as well. And that character, there’s a stability to that, if you look back over certainly the recent past that has kept rents stable. But we are right now in the midst of this fight against kind of a 20th Century problem which is angry homeowners who don’t want public housing tenants or what have you moving into their neighborhood. It has a very 1966 kind of a tone to it. But, there’s also the 21st Century problem which is the problem of displacement and the problem of rapid gentrification.”

The future of 5150 is unclear, although its prospects are dimmer now than in the past. But  the Neighbors group says it will continue to fight for the building, and for affordable housing in the area. “Our organization is going to hold our alderman and the aldermen of the City who make noises about supporting affordable housing responsible,” declares Gronkiewicz-Doran. “And it’s not just the two of us. Our organization is growing every day. We had over 1,000 signatures on a petition in support of this building. We’ve door-knocked and talked to hundreds of our neighbors who think that our neighborhood needs more affordable housing.”

You can listen to the audio of this show on SoundCloud here.

You can read a full transcript of this show here: CN transcript Oct 12 2017