They didn’t really succeed at the School of the Art Institute of Chicago. But a few years after they dropped out, two old friends re-connected. Both had ben successful in business and both still had a burning attraction to the arts. It’s the mid-1920’s and the area around North and Wells is teeming with boarding-houses and low-income tenements. But there are also some fine old buildings in the mix – grand victorians and solid apartment blocks, mostly run-down and sub-divided into tiny apartments.

They bought the building at 155 Carl Street (Now Burton).

Over the next few years they transformed the building into a artist lofts and started attracting young bohemians looking for a different, creative kind of life. Before long, they’d transformed many buildings in the area.

What they didn’t know is that they were igniting a movement. In his new book The Battle of Lincoln Park, author Daniel Kay Hertz calls them the Rehabbers. 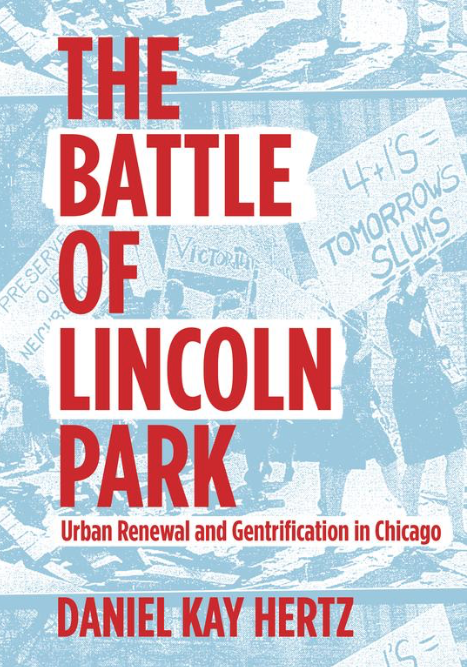 Nobody was concerned that the tenants already living in their building were displaced. It probably only affected a few people and there were lots of other places for them to go.   But a decade later as more and more buildings were being bought up and rehabbed, displacement was becoming a serious issue. Gentrification had arrived in Chicago.

Hertz tells in great detail how the Rehabbers, convinced they were saving the inner city as their peers ran off to the suburbs, formed community associations to fight for their goals. But, increasingly, they were finding themselves in conflict with their non-Rehabber neighbors.

“One of the things that that leads to,” Hertz explains, “is that they lobby to bring in an urban renewal program, and they end up tearing down about one out of three buildings in the sort of initial renewal area which is right around the Old Town Triangle. It’s…a level of physical destruction that the neighborhood hadn’t seen since the great fire.”

What they ended up creating was something Hertz calls “their own little green zone.” And the tensions with their neighbors began to rise.

“They were aware that low income people and housing that provided affordable housing for low-income people, and later on people from Appalachia or from Puerto Rico threatened that, and threatened their property values,” he asserts. “That becomes, I think, into the ‘50s and ‘60s, that becomes the central tension of their program.”

“So they successfully get certified as a federal urban renewal area in 1956,” he continues. “They start actually certifying the plans and stuff in the early 1960s, and there’s three big things that they do. So the first one is they create what they call a modified super highway on North Avenue which at that time was a two-lane street with dense storefronts and then a couple of stories of apartments above it. And they clear that out. They demolish the entire north side of that and expand it effectively creating a sort of barrier between the triangle north of North Avenue and the much lower income in the much blacker area south of North Avenue. The second thing they do is they do something similar on Larrabee Street which is sort on the western edge of the triangle, and they don’t widen it but they do essentially tear down every building from North Avenue to Webster, so for three-quarters of a mile virtually every building was torn down and replaced with modern townhomes. And they also create Oz Park, which is a couple of blocks right at the top of that section of Larrabee that was full of six flats and colleges and a couple of hundred people who were just sort of thrown out for what’s now Oz Park. And that also kind of creates a barrier between the triangle on the east and the lower income and especially more Puerto Rican areas to the west and to the north.

And then the last thing they do is Ogden. Which interesting. Ogden had been itself a kind of early urban renewal project. It was one of the few diagonal boulevards from the Burnham Plan that actually got built, so it sort of got punched through up to the lake. But by the early 1960s the argument from the rehabbers was it’s this big ugly street that the traffic is…it’s not being used as much as it could be. You know you would also notice if you looked at a map that Ogden ran right from the triangle directly to Cabrini-Green. And by closing Ogden they closed off a major sort of arterial connection to Cabrini-Green into Lincoln Park.”

This was all happening, it should be noted, shortly after the Cabrini-Green towers were beginning to rise. And Hertz tells us that his research showed him something about he neighborhood the he hadn’t fully realized.

“The history of that neighborhood, the former Cabrini-Green, had been a very low-income deeply stigmatized neighborhood far back well into the 1800s, first as Irish and then Sicilian and then increasingly black in the early 20thCentury. And there’s an editorial from the Tribune from I believe the 1920s saying basically look we’ve created, in the words of the time,  a “black belt” on the south side right through Bronzeville. They could already tell, okay, there’s a little bit of a black belt forming on the west side. Is this area that became Cabrini-Green, is this going to form a black belt on the north side? We have to stop it.”

At about the same time, Arthur Rubloff proposes to the City that they tear down multiple blocks along Clark Street, or “La Clark” as its mostly Mexican and Puerto-Rican residents call it. He builds a wall of luxury high rises, calling it Sandburg Village. It serves, among other things, as a buffer between the tony Magnificent Mile and the poor enclaves to the immediate west. But many of the displaced people move into north Lincoln Park, which further upsets the Lincoln Park Rehabbers

Radical opposition to the gentrifiers and urban renewal begins to rise to the north. A faction of the Young Lords assembles in a church at Armitage just west of Halsted and the tensions grow so rapidly that the pastor and his wife are murdered.

But through it all, gentrification – and  urban renewal – continued. And the impact over a few decades was staggering. Between 1950 and 1970, the population of Lincoln Park dropped from 102,000 to 68,000 just as a result of de-conversions of buildings. Urban Renewal programs, in which entire square miles were simply bulldozed with federal “slum-clearance” funding, removed thousands more people from the area.

“One of the things I wanted to do with the book was say, Look, we have these conversations about gentrification, that at least in my experience go back – okay maybe we talk about Wicker Park in the ‘90s or maybe the ‘80s, but you can trace those back to the ‘40s or the ‘30s or the ‘20s even. It’s the same thing”

You can watch the show by tapping the image above.

You can listen to the show here.