It’s a double header this week as we’re visited first by the great Maya Dukmasova (Chicago Reader) and then by former Mayoral candidate Paul Vallas.

Dukmasova expresses some surprise at the strength of the resistance to two big votes yesterday in the City Council. “It’s for the generally spineless City Council that tends to vote 100% with the mayor on whatever he wants – this is a pretty significant amount of opposition,” she reports.

We’re talking about the twin votes on Lincoln Yards on the north riverfront and the Police Academy in West Garfield. Lincoln yards passed 33-14, and the police Academy passed 38-8.

“There’s kind of an interesting mix of people who are sort of progressive and folks who it’s not surprising that they would go ahead and vote no on something the mayor wants. And then, there’s some people who I think are feeling the heat of their upcoming re-election battles on April 2nd. So for the Lincoln Yards deal you had of the 14 no’s, basically half of them were aldermen who face tough re-election battles against more progressive candidates.”

There are plenty of observers speculating that the next City Council may be a bit more progressive, or independent than we’ve seen in our lifetimes. Whether or not the runoffs will prove that theory, Dukmasova credits the activism of a dedicated band of young Chicagoans. “I really think that we should consider the fact that this became an issue purely because of the relentless agitation and organizing of young black and brown kids and community organizers who made this a thing,” she asserts. “They turned this from like a swept under the rug kind of barely announced mayoral initiative that was rolled out on a 4thof July weekend a couple of years ago into a litmus test on progressive values in this election and into really a huge visible battle that’s going to energize, that’s probably energizing a new generation of organizers and activists.”

We point out that, despite the activism, voter turnout, particularly in the West side wards adjacent to the future Police academy, was dismal. So it will require a great deal of stamina for these younger activists to see tangible results from their activism.

“I do think that change and changing power dynamics takes a really long time,” she explains, “and it takes a lot of losses and it takes a lot of experience of coalition building and community organizing and knowing especially on the cop academy how young the people were who were waging that fight, who made that into a battle in the first place. Frankly if I was these aldermen I would keeping my eye on what these folks are going to do next because these battles are not going to be over.”

It’s not directly related, but two aldermen who were defeated in February fell to first-time challengers who were considerably more left-leaning.  “”But,” she adds, ” I think Joe Moore from the 49thWard and Proco Joe Moreno from the 1stWard -both of them voted yes on these deals going out the door – which I just think it speaks to the character of these people whose political careers at this moment are kind of over.”

We ask if she’s observed that there is a slowly-emerging ideological split  between progressives regarding whom to support in the Mayoral runoff.

“Yeah,” she says, “and the progressives who don’t buy that Lori is the progressive candidate or Lori Lightfoot is the progressive candidate, from what I’ve observed it all comes down to the fact that she is not a progressive choice when it comes to criminal justice policy based on her track record which is the only thing she has a track record on…But policing and criminal justice stuff is like only one aspect of this election and I think that the other thing for the progressive kind of that the more left progressive camp out there who is for Toni, I suspect that someone like Carlos Rosa is also looking at Toni Preckwinkle’s record in county government, the policies she’s actually pushed for, the stuff that she’s actually passed, the stuff she’s been a champion on and saying like okay well she doesn’t have like a strangely mixed bag of like a pro-police record and she’s also got these other things going in her favor. The problem of course is there are a lot of people that really don’t see Toni a progressive because of the taxes… ”

We’re just over two weeks away from the Mayoral election as this is recorded, and we asked Dukmasova for, if not an outright prediction, where she thought things were trending.

“I think that people are right to suspect that there’s going to be perhaps an even less turnout. I don’t know if the confusion of 14 candidates is going to be compensated by now there’s only two given that a lot of people aren’t very excited about either of them. What I do think is that Lori Lightfoot’s base is way more excited about her than Toni Preckwinkle’s base. I don’t even know if Toni Preckwinkle has a base frankly, and based on the results of how things shook out between the 14 candidates, her winning only a couple of wards that says a lot about her lack of base… But Lori Lightfoot’s base who most of them are whites, these are white wealthy people who actually aren’t themselves impacted by the city’s discriminatory policing who are looking at her record like oh, this is the person who was Rahm’s police reform or whatever. They are seeing her as a progressive because they don’t actually know what it feels like to be a family member of a person who has been battered or killed by a police officer who then has to stand in front of her and try to make a plea for the police board to do something about it. But those people in her base are very energized. They are working hard. Lori is very diligent about being at every possible public debate to make herself available and Toni has really been digging her heels in and trying to run a much more politically dirty campaign, so I don’t know.”

Note: Maya Dukmasova’s interview is the first 30 minutes of this program, and the Paul Vallas interview begins at about 30:00.

You can watch this program by tapping the image above.

You can listen to the discussion here.

You can read a full transcript of this discussion here:CN Transcript March 14 2019

Paul Vallas believes fervently that the pension funding crisis doesn’t have to be a crisis. He agrees that, over the next four years, the City has to find about billion extra dollars to meet pension payment obligations, but he says that can be done without raising property taxes.

We begin the discussion with  this graph, which was created by  Daniel Kay Hertz at the Center for Tax and Budget Accountability: 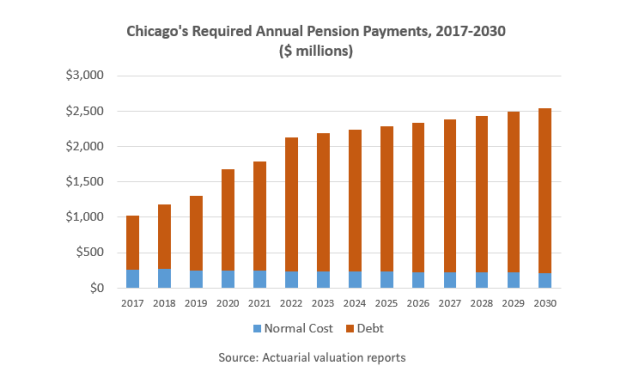 As Hertz says in his narrative: if you take a closer look the benefits themselves aren’t what’s driving the pension debt crisis, rather it’s pension borrowing, a failure to pay in full for the benefits earned in prior years has led to a situation in which the city is not only paying for new benefits every year, but billions of dollars for benefits that were earned in prior years. So our problem isn’t that we’re paying too much in benefits, it’s that because we were irresponsible about making payments for years, we now owe a billion extra dollars in interest to the banks.

First, Vallas says, “they’ve got to bring some sort of financial accountability to the investment practices.” There are hundreds of various funds that invest pension moneys in hopes of using the dividends to augment the pension funds. But that’s not what’s happening, he says.

“First of all there’s no substitution for having some sort of comprehensive agenda in Springfield, right. Now the legislature is moving to enact or to take steps that will bring about the enactment of a progressive income tax increase. There’s going to be a state income tax increase…But the bottom line is if the income tax is going to be increased it’s important that the city protect its share of the local government distributed fund because a portion of all income tax received is supposed to go to local governments. The last time they raised the income taxes they juggled the formula so locals would not get that share. If that happened the city might get another $140-150-million a year.”

“And you don’t have to do it in a single year,” he continues. “You do it over a period of four years because remember we want to ramp up here. So if you are able to protect a share of new income tax revenue, so local governments would get their share as they have historically, and if you are able to end the illegal diversion of the corporate personal property replacement tax revenues you would have between $250-275-million you know and instead of having a billion dollar net you would have closer to a $700-million net.”

Chipping away at “funding inequities” with the State could get the total down to less than $500 million,  he claims, asserting that reprogramming a City budget that (depending how you describe it) is between 7 and 20 billion a year, can yield a half-billion  that can be used for this purpose. So before the deadline hits, Vallas thinks the billion dollars can be found without new taxation.

It’s a complicated presentation, and Paul Vallas is among the world’s fastest talkers. But he’s offering the two remaining Mayoral contenders his best advice on how to get out from under what he calls the “Sword of Damocles” as one of their first actions.

Watch the show by tapping the image above, and moving the pointer to 30:00.